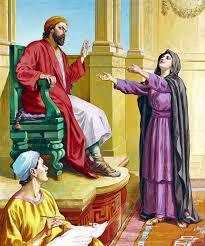 In today’s Gospel we have another parable, the Parable of the Unjust Judge. Robert Capon, our Episcopalian priest and theologian, says this parable belongs in the collection he calls the “parables of grace”. It’s a little story meant to encourage Jesus’ disciples to keep asking God for what they need, and when it doesn’t come, to ask some more. But it’s an odd little story. As in all of Jesus’ parables, he throws in a slightly weird detail which makes us wonder where he’s going with this particular teaching. The judge is being badgered for a decision about her case by a widow: the widow is a symbol for a person in ancient society who is most vulnerable, having lost all her financial and emotional security.

The weird detail here is the description of the judge: Jesus describes him as one who doesn’t fear God nor respect people – not a judge who dispenses justice fairly before God or who cares about the people and the society he is employed to serve. Is this judge supposed to stand for God – the one Jesus teaches his disciples to trust for all their needs? The judge responds to the widow, considering his own interest, and decides to give her what she wants, because otherwise she will drive him crazy with her constant asking. Jesus says, “Listen to what this unjust judge says. Won’t God give justice to his beloved people who ask for it day and night? Will he make them wait a long time to help them? No, he’ll give it to them right away.” How does the unjust judge serve Jesus’ purpose here?

Robert Capon says that this judge represents our gracious God in that he grants the woman’s petition regardless of the weight of her case, regardless of the evidence she brings, just because he is able to do it.

The judge is acting not like a judge, even making himself look bad, in order to bestow grace upon the woman.

Capon puts it this way:

Here is a jurist, a practitioner of the law, whom Jesus…portray[s] as a barefaced agent of grace…precisely because he breaks the rules of his profession and puts himself out of the judging business. All of which, Jesus implies without apology, makes him a perfect stand-in for God. [Robert Farrar Capon, The Parables of Grace, William B. Eerdmans Publishing Company: Grand Rapids, Michigan, 1988, p. 172]

How does this impatient, dismissive judge make a perfect stand-in for God? By being willing to dispense grace to the undeserving…in this case, the determined, bothersome woman, who may or may not have a just claim. Which doesn’t say much for the judge’s skill and reputation as a judge. In Capon’s words:

God doesn’t even wait for us to accept our losing: he simply goes ahead with his own plans for the high old time he has in mind for himself. Like the father in the Prodigal Son, he just runs, falls on all our necks – the widow’s and yours and mine – and showers us with injudicious kisses simply because he wants to get the wet blankets off his back and let the party begin. [Capon, ibid., p. 174]

So we’re saying God doesn’t care so much about his reputation as God, but rather about the bringing of those who know they need something from God into the Kingdom of God, where they will find what they need – which may or may not be what they thought they were asking for.

Our coming into the Kingdom – our salvation, in other words – doesn’t depend on our understanding of our own situation, but on the goodness of God.

Capon calls this judge who seems to stand for God an “anti-hero” – one who doesn’t seem to care about how he appears to those who ask him for justice, because he is really more concerned that they get what they need – and incidentally, perhaps, get off God’s back in the meantime! Not really. This is the “twist” in the parable: to draw our attention to the unsuitability of the judge and help us to see God’s unsuitability as a judge – a judge who freely grants justice and freedom and forgiveness and hope to those who come asking.

We might ask “What do we expect of God?” “Do we really want justice – that is, the outcome we deserve – from God?” Because if we do, we could be quite surprised when we get it. It’s probably not wise to come to God presuming that we have a just cause – that is, self-righteously assuming we deserve a positive outcome and hoping to get it. It’s probably safer to come in a state of utter humility, knowing that because of our shortcomings and failures, we hardly have the right to ask. And God, who has sent Jesus, another anti-hero, to be the Saviour of the world, has no hesitation in granting our petitions. It’s not about us, it’s about Jesus. And on that basis, God pours grace all over us.

In earthly time, the widow is denied the judge’s attention to her plea for justice, but in God’s time, she receives what she asks for.

In the parable, Jesus says for a while the judge refuses to attend to the widow’s case. According to Robert Capon, the Greek translation of “for a while” is epi chronon which refers to our time, historical time, sequential time, even low time - earthly time so familiar to us during which we struggle with human limitations. But “later” or “afterward” (meta tauta in Greek), the judge has a change of heart. Capon says, “I suggest that this after time might possibly stand for the Kairos, the high time of God in which alone our time is finally reconciled.” [Robert Capon, ibid., p. 173] The reason for noting this distinction between earthly time and Godly time is to recognize the breaking-in of God into our earthly time. Yes, we are limited in this earthly life by the limitations of our physical and psychological nature, but because Jesus Christ came into our world in a specific physical and psychological form, the Kairos, the spiritual reality of God’s time, entered our world along with him. Therefore we have access to God’s time because through the intervention of Jesus the two kinds of time overlap. I would say that in the parable, initially, in earthly time, the widow is denied the judge’s attention to her plea for justice, but in God’s time, she receives what she asks for. Because of Jesus, these two aspects of time both exist on this earth – earthly time completely, and God’s time partially – but when Jesus comes again, God’s time will be complete, and all will be resolved. Meanwhile, as Paul says, we see as in a darkened mirror, with shadows that cloud the image of God – but we do see him, and he is able to communicate with us.

There is a problem among Christians about the law. We create so much trouble among ourselves, and between ourselves and those outside the church by worrying constantly about law-keeping. God gave us the law, we say, and we must keep it. That’s true. But inevitably, being human, we don’t keep it, and then the Gospel kicks in. That is God’s plan: to find a way to save us from our failure to keep the law. We seem to have a lot of difficulty accepting God’s plan for salvation of sinners. Possibly we accept it for ourselves, but we definitely have a lot of trouble extending it to those beyond the pale: those who threaten our possessions, our comfort, our peace of mind, our ways of thinking.

It’s remarkable how quickly good people can turn to hatefulness when we think we’ve been treated unfairly, or when we think someone else gets more than we think they deserve. I frequently see it in myself – and now especially during an election campaign! It upsets me to hear people express ideas contrary to mine because it undermines my own sense of being right. And my peace of mind depends upon being right – doesn’t it? Well frankly, no. My peace of mind depends upon being reconciled to God and to my neighbour. And that may be had by repeatedly asking God for reconciliation – “repeatedly” because, given our human inclination to stumble into sin, it’s necessary to ask over and over for forgiveness, redemption and reconciliation. That’s why Jesus teaches his disciples to “pray always and not…lose heart.”

And he ends by saying, “when the Son of Man comes, will he find faith on earth?” What sign of faith is he looking for? The willingness to ask, every day if necessary, for that which we need – and high on that list is the need to confess sin and receive forgiveness. And God, whose job it is to uphold the law, but who values grace even more highly than the law, will grant our petition – for now. Since we are still in chronos – historical time, clock time, calendar time, earthly time, low time – it won’t be a final answer. That answer will come in God’s future, Kairos time – resolution time, salvation time, heavenly time, high time – when all is clear and worked out eternally.

In the meantime, there is grace. Thanks be to God!