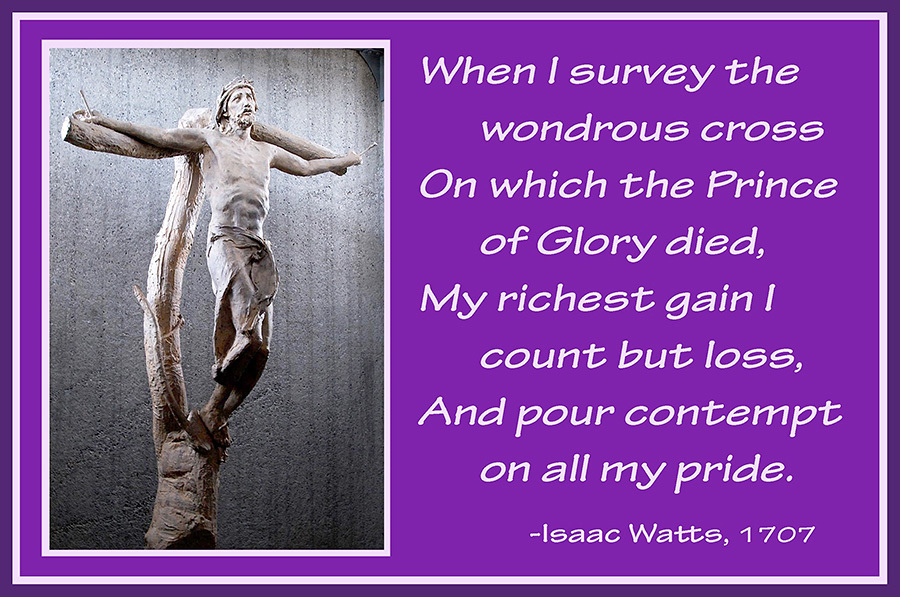 This reflection by Warren Harbeck appears in the Cochrane Eagle, February 27, 2020 in his column "Coffee with Warren".  -- Father Greg

The article is also available on Warren's website here.

There’s an old hymn that sings to the very heart of nearly all our Christian readers, regardless of what church they attend: Isaac Watts’ When I Survey the Wondrous Cross. To honour this first week of Lent (the approximately 40 days leading up to Good Friday and Easter), I’d like to share a personal reflection on that wondrous cross that will take us to the foot of The Tree of Life Crucifix, where I regularly spend two to three hours a week in prayerful contemplation.

The Tree of Life Crucifix, by American sculptor John Collier, stands in Christ the King Chapel at St. Mary’s Catholic Church, Cochrane. It’s not the smooth, straight-edged, symmetrical kind of cross usually encountered, but rather an old rugged, bent tree trunk and branch. On the tree is a tattered, whipped, and disgraced Jesus, now nailed to the place of His execution.

As I contemplate that cross, I recall the Apostle Paul’s words: “Let this mind be in you…”

What? The cross is to shape my attitude for life today?

Here’s the context of St. Paul’s words as they appear in Philippians 2:5-8 (New Revised Standard Version of the Bible):

Let the same mind be in you that was in Christ Jesus, who, though he was in the form of God, did not regard equality with God as something to be exploited, but emptied himself, taking the form of a slave, being born in human likeness. And being found in human form, he humbled himself and became obedient to the point of death – even death on a cross.

Very interesting. Jesus did not flaunt His divine identity to His own advantage!

To the contrary, the Prince of Glory sojourned among us as the least, as a vulnerable servant committed to serving His Father by showing love and compassion to His human neighbours. Indeed, He “emptied,” or “humbled,” Himself and became obedient to His heavenly Father, even if that meant “death, death on a cross.”

Jesus walked the Beatitudes, a way so contrary to the fear-driven greed and arrogance in our world. And St. Paul dares to say that this is to be the norm for our own lives? That’s heavy! Indeed, as the Apostle says elsewhere: “If for this life only we have hoped in Christ, we are of all people most to be pitied.”

But that’s not where the story ends, as we know well from the signature event of Easter. St. Paul continues in his letter to the Philippians:

Therefore God also highly exalted him and gave him the name that is above every name, so that at the name of Jesus every knee should bend, in heaven and on earth and under the earth, and every tongue should confess that Jesus Christ is Lord, to the glory of God the Father (Philippians 2:9-11).

And the implication for us? As the Apostle says, denying that those who follow the mind of Christ “are of all people most to be pitied,” Jesus was “the first fruits of those who have died.”

Thus, upon surveying that wondrous cross, I must conclude with Isaac Watts: “

My richest gain I count but loss, and pour contempt on all my pride.