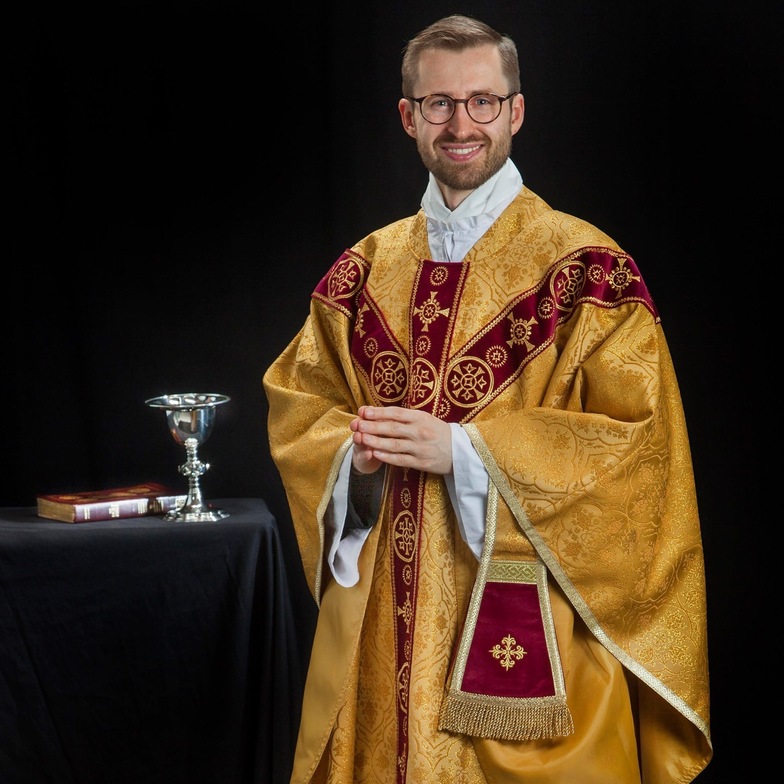 Father Matthew came to All Saints on a two-year contract as Curate. That time is up, and he has decided on a next step in his ministry.

Announcement by the Archbishop

The Archbishop has provided a letter which was read to the All Saints congregation on June 6, and a copy is in the download link below. In short, Father Matthew has been offered a position as the Rector of St. Thomas Episcopal Church in Eustis, Florida. After a time of prayer and discernment, he has accepted, and his last Sunday at All Saints will be July 18. He and Linzie will be in Florida in September (depending on immigration and COVID restrictions).

As many of you know, my curacy at All Saints, Cochrane has been set to end in August of this year. Two years have flown by, and with the challenges of ministry during time of Pandemic, it feels as though it’s been far longer and far shorter at the same time!

I have been in a discernment process from some months now, seeking my next cure. While both my wife and I had hoped to stay local, God has other plans for us. Archbishop Greg Kerr-Wilson today announced his acceptance of my resignation as a priest of this Diocese effective in August in order to accept a call to serve as the next rector of St. Thomas, Eustis in the Diocese of Central Florida under Bishop Greg Brewer. My last Sunday at All Saints will be the 18th of July, and I will be taking some holiday time after that.

I need to thank my dear wife Linzie, who has prayerfully discerned with me these past few months, and who has been a significant encouragement as we have opened our minds and hearts to consider ministry in such an unlikely place.

Finally, I would like to thank the many friends who have offered me their fervent prayers and wise counsel over the past few months. It has been a challenging time of possibilities and opportunities as different doors were opened and closed until the way became clear.

Gathering restrictions do not currently permit the planning of any kind of farewell party, but I do hope to see people in person to say my goodbyes before leaving in July. Please feel free to reach out about getting together, weather and restrictions permitting.

This is part of the announcement by the wardens at St. Thomas, Eustis (website: stthomaseustis.com) taken from the June 2021 newsletter St. Thomas Tidings.

From our Sr. Warden, Leon Stricklen

By now all or at least most of you know we have a new Rector. He is a delightful young man (35) from Canada.

He has been a priest since June 22, 2019 and currently serves as a Curate at his Canadian church. He is married to a delightful, energetic young lady that is sure to be an additional asset to St. Thomas. She is a native-born American citizen so that may help with any potential immigration issues.

As it currently stands, he is expected to begin services at St. Thomas on or about September 12, 2021. That date may be adjusted depending upon any issues that may arise (such as immigration) prior to September 12.

The Bishop’s reaction to him after his personal interview was “Home Run!”. The entire Search Committee aka Vestry was very impressed with him and chose to make the call as soon as possible before anyone else got him. His and his wife’s reaction to St. Thomas and our Central Florida area was very positive.

Folks, I think we have a WINNER!

At All Saints we knew we had a winner and Matthew and Linzie will be missed.