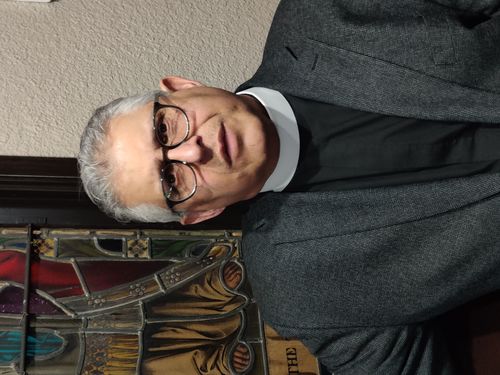 Fariborz, who says by virtue of his unusual set of life experiences and a weird name, is happy to work with All Saints Cochrane to bring about good and practical changes, and to lead the people of God to glorify Him and enjoy Him forever.

Rev. Fariborz was born in Iran, and into the religion of Islam. He came to a saving knowledge of the Lord Jesus Christ during his teen years, through the Anglican Church in Shiraz, Iran. This made him, in essence, an apostate as far as Islamic law is concerned, and he should have been punished by death. But this aspect of the law is often not observed by Islamic governments and the authorities tend to turn a blind eye to Christian converts as long as they keep a low profile and are not too vocal about their faith.

Growing up, he never imagined himself a Pastor. He originally trained as a gas-pipeline welder and had no inclination or desire for ordained ministry. His priest was elected as the Bishop of Iran, but since he could not travel out of the country, the consecrating Bishops came to Iran. The speaker was The Rt. Rev. Dr. Michael Nazir-Ali, who is originally from Pakistan. He did not know Farsi (modern Persian), but knew classical Persian and was planning to preach using that; not many people in the congregation knew the classical dialect, so Fariborz, who knew classical Persian and English, was tasked with seeing how the sermon would sound to modern ears. As a result of spending time with Bishop Michael, and having many long conversations, he said, “Fariborz, you must become a priest.”

In those days, the war between Iran and Iraq was raging and he was a conscript in the Iranian armed forces. He was a very “macho” young soldier, and, without missing a beat, told him, “Bishop, don’t you know it is God who must do the calling?” To which he said, “I am a bishop in the church of God, and I am calling you! I will pray for you to own this calling, and answer it.”

His new pastor and the believers agreed with the Bishop, and started to entrust and encourage him to take more leadership and preaching roles in his church, thus raising his “profile” and that meant trouble for him from the Secret Police. He had already been in prison once, and did not want to repeat that. A few months later, he finished his military service and was honourably discharged. As soon as he obtained his discharge papers, he took his passport, left his family, friends, and homeland, and became a refugee in Cyprus. After four years, he managed to immigrate to Canada in 1992, and is now a proud Canadian citizen. When Fariborz was about to be ordained a deacon in 2000, he sent a quick note to Bishop Michael, “Are you happy now?”. To which he simply responded, “YES!”.

Rev. Fariborz has experienced a wide range of Christianity. He played guitar and led praise and worship services, worked with YWAM, and did “Street Outreach”. He studied at Tyndall University College in Toronto (Anglican evangelical), graduate studies at the Toronto School of Theology (University of Toronto), but also attended St. Mary Magdalene Anglican Church in downtown Toronto, which is an Anglo-Catholic parish. He served on the Altar Team as an Acolyte and Thurifer.

While a curate at St. Jude’s Wexford in Toronto, he ran three Alpha courses out of his home. In a church plant in Richmond Hill for Islamic converts, he led services on guitar along with his wife playing piano, and they often invited people back to their home for meals. And more recently in Christ Church, Grand Prairie, his BBQ grill was put to good use serving up Persian food.

He is married to Shirin, who is also from the Anglican Church of Iran, and they have two beautiful children.